My friend Peter retired a few months back.  I have known him as long as I have worked at the Post Office.  He has been a special friend that always made my day a little bit brighter.  He received two quilts when he retired. 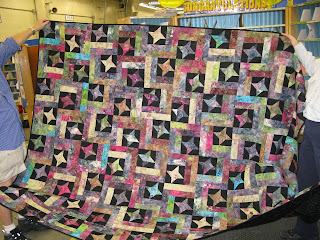 The first quilt is a friendship star quilt that I made quite a few years ago in anticipation of Peter's retirement.  Once I was joking with Peter saying he had to give me a little notice if he expected a quilt.  He said that he knew I had one already done!  He was right. 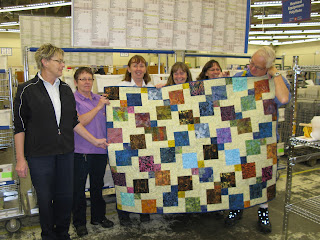 The second quilt was made by the Postie Quilters.  If it looks like Terry was about to cry, I'm sure she was.

Only a couple of more Postie retirements before it's my turn.  Woohoo!  I'm on serious countdown now.
Posted by quiltmania at 22:13