A Lovely Batch of Quilts


It feels so good to have a few quick finishes to give away to the local Elizabeth Fry Society. 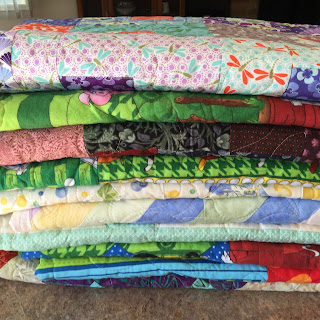 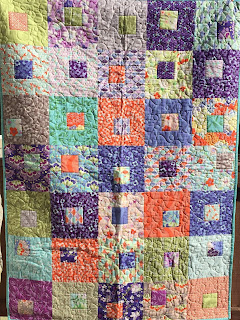 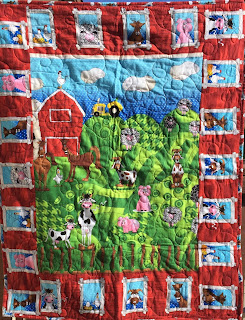 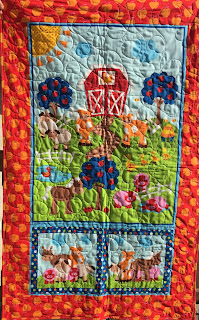 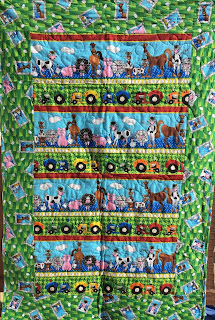 Fun quilts for the women and children who live in the local residential units working towards a new start to their lives. 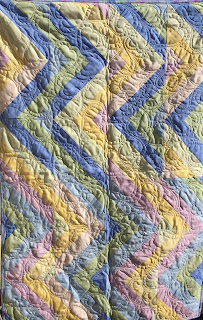 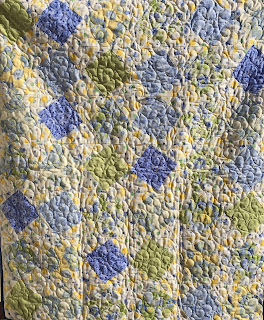 The tops for these two were donated by Deborah.  A lot of the backing and batting was donated by Trendtex fabric.  Thanks to all (you know who you are) that make it possible to give quilts to such a great local charity.

Linking up with Finish it up Friday!
Posted by quiltmania at 10:20 3 comments:

Most of the past week was spent quilting Bev's Arcadia Avenue.  She had done an amazing job of piecing the top, so quilting it was a pleasure! 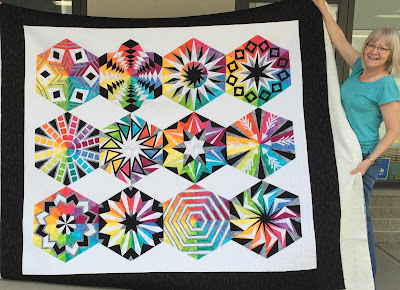 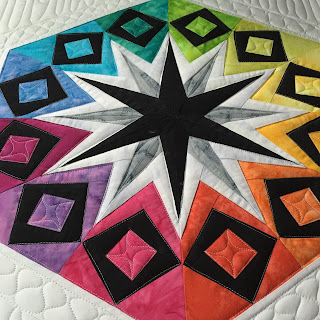 I tried to do a little something different in each block, with a lot of in the ditch to emphasize the piecing. 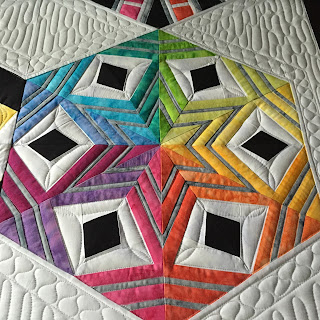 The background quilting was meant to echo the large hexagons. 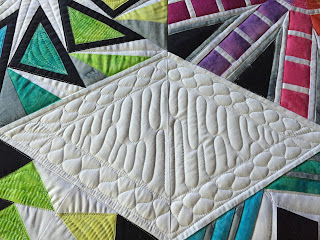 With a bit of a modern flare! 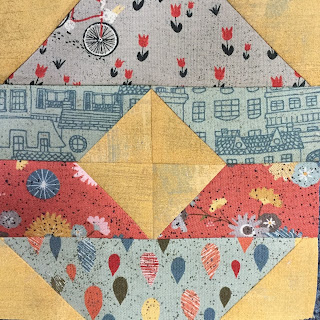 Only one Splendid Sampler block managed to get finished this week.  Oh well.

Linking up with Finish it up Friday.
Posted by quiltmania at 09:18 7 comments:

This past week I quilted two Lone Star quilts for friends.  One was made using 2 1/2" strips with 1' sashing.  Working in the smaller scale is a bit of a challenge, but Joan was up for it. 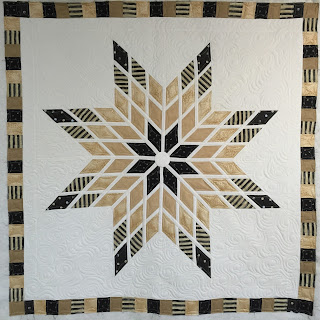 This little beauty finishes a little over 40" square.  The plan is for this to be a wall hanging. 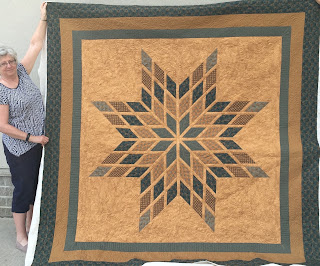 Barb's quilt was made with 4" strips and 1 1/2" sashing.  Add a couple of borders and it finishes at 93" square.  What a difference the strip size makes! 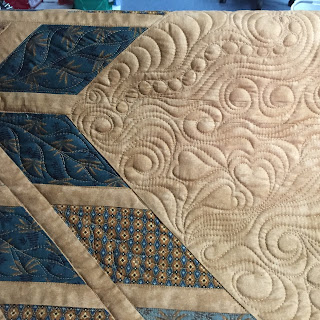 Both quilts have a bit of my doodle quilting on them. 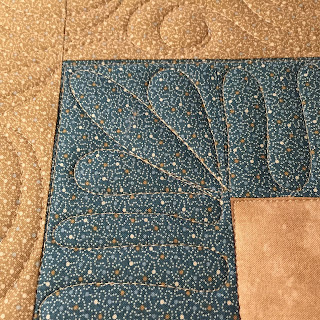 I often take pictures of the corner quilting at the top so that when I get to the border at the bottom a couple of days later, I can remember what I did.  Saves having to roll the quilt back on the longarm to check.  I've had to do that a time or two. 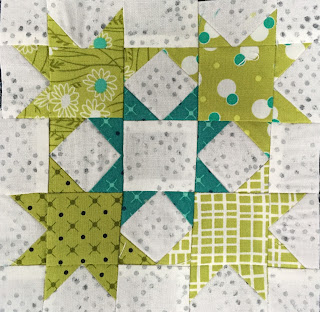 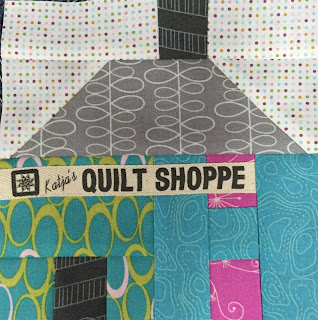 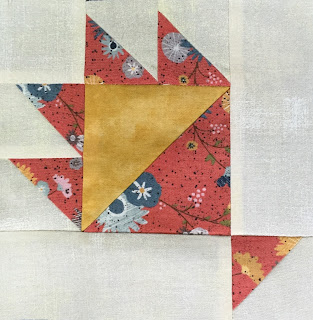 My Splendid Sampler blocks are coming along.  I'm using whatever scraps I have hanging around my cutting table.  The little dots on the quilt shop block is so old I don't even remember where it came from.  I'm struggling a little to get caught up on the blocks from my last holiday.  Oh well, I can only do what I can do!

Linking up with Finish it up Friday.

This week has been a little hectic, so the finishes are quick little project. 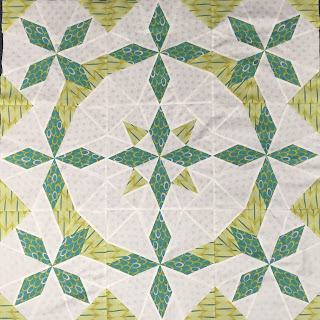 This little top is another example for my Kaleido-design class.  It will be quilted eventually. 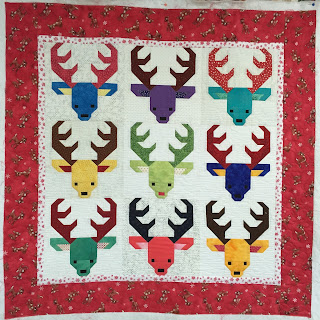 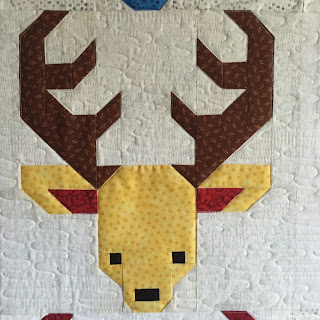 This cute little topper was pieced by Iva and quilted by me.  The pattern is by sewfreshquilts. 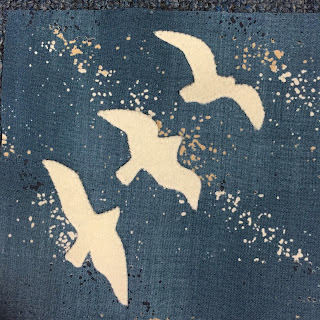 I only managed to get one block from the Splendid Sampler.  I used Janet Claire's fabric for the block designed by Janet Claire.

Linking up with Finish it up Friday!
Posted by quiltmania at 10:51 4 comments:

Finishing up an Oldie!

Eventually I do get around to finishing up some of my older tops.  If there isn't a deadline, quilts tend to by pushed aside.  I rummaged around and found this one that uses blocks from my Stash Busters Quilt Along from September of 2013. 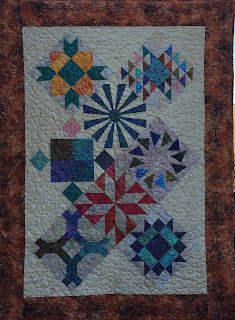 I wasn't totally pleased with the layout, so it waited until I had a deadline.  I decided it would be a good quilt to give to charity, so it hit the top of the list for quilting and now it is ready to go.  It has a very cozy flannel on the back so it will keep someone warm.

I am way behind on my Splendid Sampler blocks, but I'm okay with that. 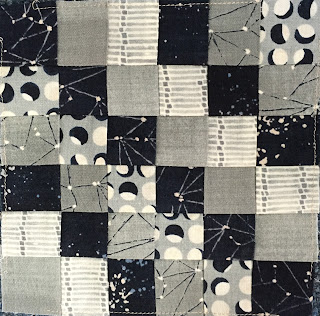 I used Janet Clare's "Nocturnal" for this one  I see that the most recent block is designed by Janet, so I may have to use some of her fabric for it! 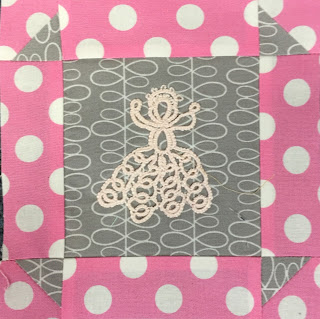 This block was supposed to have embroidery that looked like a crocheted doily.  Instead I dug out this treasured little angel that I tatted about twenty years ago.  I was saving it for something special, so here it is. 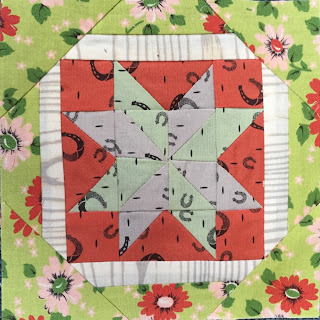 "Purebred" by Erin Michael is the fabric in this block.  I wanted a little horse related fabric included, so these horseshoes fit the bill. 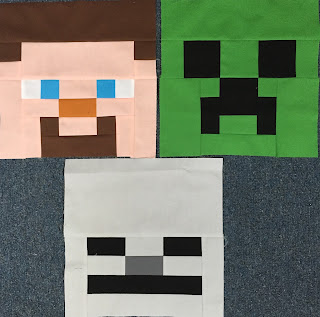 And because one quilt along isn't enough, I decided to join Kelli's Minecraft Quit Along.  I have been following Kelli's blog for quite some time.  I remember how excited she was when her first pattern was published.  She's come a long way since then. 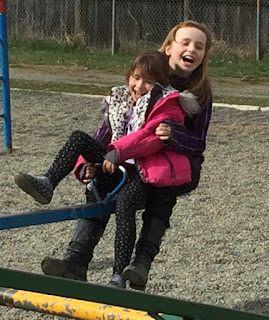 This past Easter Weekend was spent playing with the Grandkids.  These two spent an afternoon with us.  I love this picture of them being bounced on the teeter tooter by Grandpa.  They made pillowcases while visiting, but we were having so much fun, I forgot to take a picture.  The other two Granddaughters came the day before for a Easter Barbecue and muffin icing marathon with Auntie Leslie.  A great time was had by all.

Linking up with Finish It Up Friday